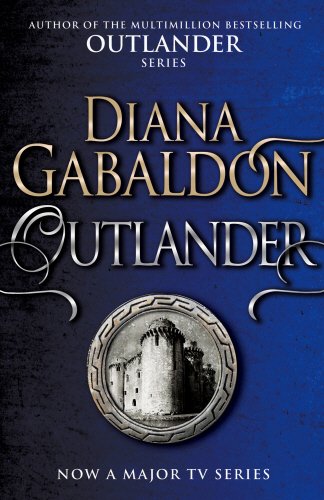 Unrivaled storytelling. Unforgettable characters. Rich historical detail. These are the hallmarks of Diana Gabaldon’s work. Her New York Times* bestselling Outlander novels have earned the praise of critics and captured the hearts of millions of fans. Here is the story that started it all, introducing two remarkable characters, Claire Beauchamp Randall and Jamie Fraser, in a spellbinding novel of passion and history that combines exhilarating adventure with a love story for the ages.

Scottish Highlands, 1945. Claire Randall, a former British combat nurse, is just back from the war and reunited with her husband on a second honeymoon when she walks through a standing stone in one of the ancient circles that dot the British Isles. Suddenly she is a Sassenach—an “outlander”—in a Scotland torn by war and raiding clans in the year of Our Lord . . . 1743.

Claire is catapulted into the intrigues of a world that threatens her life, and may shatter her heart. Marooned amid danger, passion, and violence, Claire learns her only chance of safety lies in Jamie Fraser, a gallant young Scots warrior. What begins in compulsion becomes urgent need, and Claire finds herself torn between two very different men, in two irreconcilable lives.

“Gabaldon is a born storyteller. . . . The pages practically turn themselves.”—The Arizona Republic*, on Dragonfly in Amber

“Triumphant . . . Her use of historical detail and a truly adult love story confirm Gabaldon as a superior writer.”—Publishers Weekly*, on Voyager

“A grand adventure written on a canvas that probes the heart, weighs the soul and measures the human spirit across [centuries].”—CNN, on The Fiery Cross

“The large scope of the novel allows Gabaldon to do what she does best, paint in exquisite detail the lives of her characters.”—Booklist*, on A Breath of Snow and Ashes

“Features all the passion and swashbuckling that fans of this historical fantasy series have come to expect.”—People, on Written in My Own Heart’s Blood

From the Hardcover edition.

In Outlander, a 600-page time-travel romance, strong-willed and sensual Claire Randall leads a double life with a husband in one century, and a lover in another. Torn between fidelity and desire, she struggles to understand the pure intent of her heart. But don't let the number of pages and the Scottish dialect scare you. It's one of the fastest reads you'll have in your library.

While on her second honeymoon in the British Isles, Claire touches a boulder that hurls her back in time to the forbidden Castle Leoch with the MacKenzie clan. Not understanding the forces that brought her there, she becomes ensnared in life-threatening situations with a Scots warrior named James Fraser. But it isn't all spies and drudgery that she must endure. For amid her new surroundings and the terrors she faces, she is lured into love and passion like she's never known before.

I was lame and sore in every muscle when I woke next morning. I shuffled to the privy closet, then to the wash basin. My innards felt like churned butter. It felt as though I had been beaten with a blunt object, I reflected, then thought that that was very near the truth. The blunt object in question was visible as I came back to bed, looking now relatively harmless. Its possessor [Jamie] woke as I sat next to him, and examined me with something that looked very much like male smugness."

Gabaldon creates characters that you'll remember, laugh with, cry with, and cheer for long after you've finished the book. --Candy Paape

Absorbing and heartwarming, this first novel lavishly evokes the land and lore of Scotland, quickening both with realistic characters and a feisty, likable heroine. English nurse Claire Beauchamp Randall and husband Frank take a second honeymoon in the Scottish Highlands in 1945. When Claire walks through a cleft stone in an ancient henge, she's somehow transported to 1743. She encounters Frank's evil ancestor, British captain Jonathan "Black Jack" Randall, and is adopted by another clan. Claire nurses young soldier James Fraser, a gallant, merry redhead, and the two begin a romance, seeing each other through many perilous, swashbuckling adventures involving Black Jack. Scenes of the Highlanders' daily life blend poignant emotions with Scottish wit and humor. Eventually Sassenach (outlander) Claire finds a chance to return to 1945, and must choose between distant memories of Frnak and her happy, uncomplicated existence with Jamie. Claire's resourcefulness and intelligent sensitivity make the love-conquers-all, happily-ever-after ending seem a just reward. Doubleday Book Club main selection, Literary Guild alternate.
Copyright 1991 Reed Business Information, Inc.